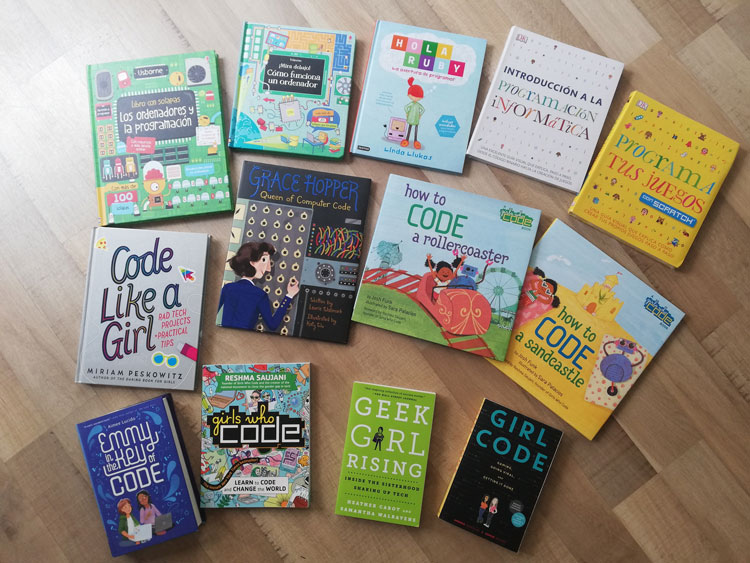 Beyond online resources, there are a good number of programming-related books that have been specifically written to bring this discipline closer to children. This week we have decided to make a book selection and recommend some programming books for children and teenagers, some of which are more focused on the practical part and propose coding projects that can be followed step by step, while some others have been published to introduce basic concepts to the little ones or to awaken vocations through referents and successful examples.

1. How to code a sandcastle

This story is part of a series that also includes a second highly recommended book: How to code a roller coaster. Both books are very visual and include vocabulary related to programming. In a simplified way and using examples adapted for children, these books introduce key concepts to learn programming, such as loops or variables, through the adventures of their characters. They explain the importance of dividing big problems into smaller ones to solve them easily, give very specific instructions and follow the steps given in the correct order.

This book has been written for children from 6 years old and is a good introduction to coding, computational thinking and problem solving of any kind. Through the adventures of Ruby, a girl who has a lot of imagination, and the rest of the characters, who represent different programming languages, children will be able to learn concepts such as decomposition, pattern identification or creating solutions step by step. Hello Ruby is a very original story where images are very important and it includes many activities that complement the story.

This book is more interactive because the contents can be discovered through tabs and combines more general theoretical information about computer science and games that introduce basic programming concepts. In this case, children can learn how a computer works, what parts it has, what programming languages are, how information is stored inside computers, or how different computers communicate over the network. It includes a lot of curious information about ICT in a visual and entertaining way and is a fun read thanks to the mix of explanations and games.

4. Look Inside How Computers Work

It belongs to the same collection as the previous one and is also an interactive lift-the-flap book that allows little readers to discover new things about computers, specifically what is inside the computers. This book reviews the history of computer science: the first computers and supercomputing, the current world and the importance of technology, the operation of the Internet, the operation of computers inside, programming languages… and it explains everything by using a very didactic tone, an adapted language and a format that, as we discussed with the previous book, arouses children’s curiosity and desire to learn.

It is a good book to get into the world of coding and get started using Scratch. The explanations are simple and clear and are generally very focused on practice, so that readers can immediately start learning to program. In the same series of books we can find the titles Coding Games in Scratch, Coding Projects in Python and Coding Games in Python, three visual guides for beginners with which children can do various projects with Scratch and Python explained step by step.

This illustrated book is a great opportunity to discover the story of Grace Hopper, one of the great women who have been a reference in the world of technology. The author of this story is Laurie Wallmark and has published other titles such as Ada Byron Lovelace & the Thinking Machine or Hedy Lamarr’s Double Life, which also seek to highlight the contributions of these professionals in STEM fields and bring their stories closer to girls so that they have STEM models that arouse their interest in branches of study that generally follow more men than women.

This is a very original book especially because of the way it is structured, as the text is written in a style that moves between poetry and lines of code that we could use to write a program. It is a story designed for readers between the ages of 10 and 12, which is precisely the age of the main character. Emmy is a newcomer to school, a difficult change for anyone, especially at this age. She feels a little lost and is not sure about who she is and where her place is, but she finds refuge in programming classes, where she will make a new friend, and throughout the story we can see how she mixes her love for music and its new interest in computer programming.

8. Girl Code: gaming, going viral, and getting it done

Finally, we also recommend a book a little different from the rest of the list, which in this case is designed especially for teenagers and young people who want to create their projects and carry out their own ideas. This is the real case of two teenagers who started working together after knowing each other in a coding club and created a video game that went viral (Tampon Run). They explain how they lived this experience and how it was their entry into the technology industry, but it is actually a book that can inspire many teenagers regardless of their interests, as whatever their passion may be, they can always try to work on their own projects and this will help them find out who they are, what their interests are and what they would like to do.