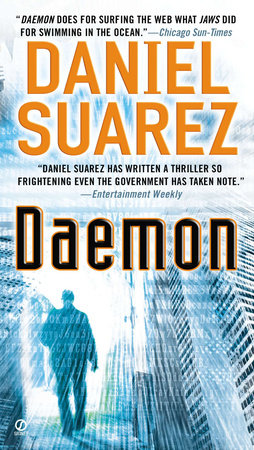 Daemon is a techno-thriller set in our world and at the present time, where Matthew Sobol, one of the most popular games designer of the industry, who had an immense fortune and an empire of companies, dies prematurely due to a disease. When he died, a chain of events arise to change our world and our perception of everything that surround us, since there’s a daemon (an independent program that runs in the background) designed by Sobol which has started to act through the global communications system in order to destroy today’s society and create a new world.

As Sobol is dead, it is impossible to know how to make this daemon stop, neither what parameters have been used to program it – and thus, his next steps. To block the evil plans of this daemon, we can count on a team formed by a hacker with a dark past, a policeman unjustly accused, a courageous FBI agent and a woman who works as a NSA agent. All of them will have to join their forces and knowledge if they want our society to last.

Online games, fast cars hunts and computer and IT security are some of the ingredients of this story. Daemon is a novel that will delight readers of all ages no matter their level of IT knowledge, as it combines high intensity and action moments with slower pace moments and thoughts about economics, politics and technology.

Why to read Daemon

One of the reasons why we recommend you to read Daemon is that most of the things it explains are really similar to reality. As readers moves forward they can see (with horror) that what is happening on the novel can also be done with the technology which we can access today – and thus they can sense that our society and the world where we live are much more fragile than we think.

The story seems a detective novel at the beginning, but it turns quickly into a techno-trhiller. As the novel moves on, the author presents some hacking techniques and digital world aspects that allow readers to better understand this interconnected world where we live.

Readers without technical knowledge don’t have to worry, since the author has also accompanied the story with clear explanations about everything that happens, which are told through the eyes of the characters who are less related to the IT world.

Daemon is a light and pleasant reading. It is easy to imagine this novel made into a film and, a film production company has already bought the movie rights.