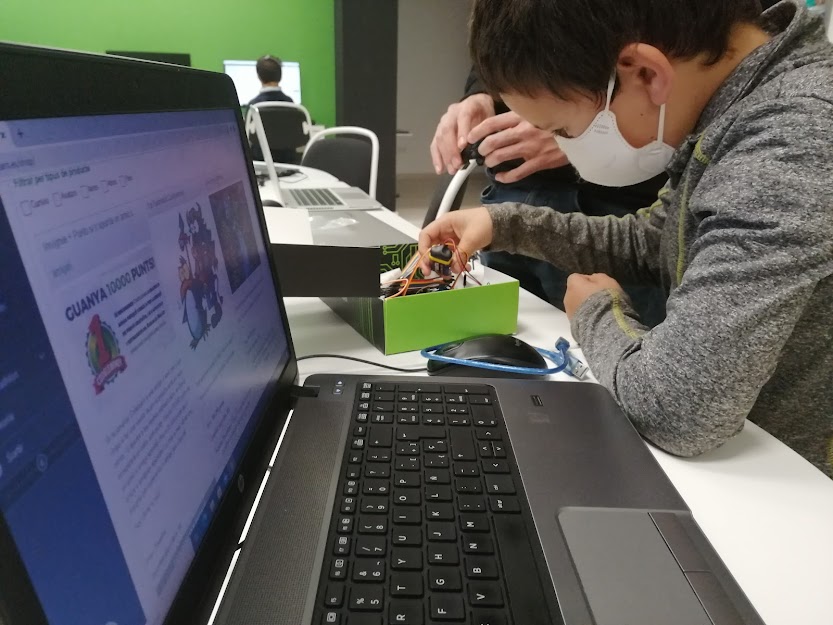 We’re back from Christmas holidays and we already know the winners of the latest edition of the Codeathlon, our programming and robotics league for students up to 18. The competition has been very close until the last round in the Golden League, the highest category, in which the clan ICKKDBB has finally managed to win by a single goal difference.

The winners finished the competition with 49 points, exactly the same as Infinity Sabadell (second place), but managed to score 130 goals, while the runners-up scored 129. The Golden League podium was completed by EXPLORER TEAM, with 45 points and 99 goals. The members of the winning clan have now 30,000 extra points on the platform, those of the second place have won 20,000 points and the third clan have earned 15,000 points. All of them have started shopping at the Points Store and have been able to choose from cool prizes such as 3D printers, Xbox consoles, Oculus Quest 2 virtual reality systems, Logitech steering wheels to enjoy driving video games, Amazon Gift Cards, Arduino Kits, among others.

As for the Silver League, Ok Boomer has been ranked first with 46 points and 30 goals, thanks to which each member of the clan has scored 10,000 points on the platform. ThE pRoS finished the competition in second place, with 36 points and 41 goals, and scored 8,000 extra points. Finally, Supercoders.cat was the third clan ranked with 35 points and 25 goals, so its members were able to earn 6,000 points. These three clans will compete in the Golden League for the next edition of the Codeathlon, which starts next weekend.

Those who have also been promoted directly to Golden League are the three clans that managed to take the podium in the Bronze League, the third category of the Codeathlon. The winners were the members of the clan Codemaños, with 48 points and 90 goals, followed by Clan Duty (48 points and 66 goals) and Project Clan (38 points and 39 goals).

Finally, Codeathlon also recognizes the individual role of some participants who have been key to their teams. The top scorers in the Codeathlon Autumn Edition 2021 were Guillem Faraudo, with 26 goals (Golden League); Martí Climent, with 26 goals (Silver League), and Manuel Chóliz, with 25 goals (Bronze League). Thanks to their great performance, they have won 30,000 points, 20,000 points and 10,000 points respectively.